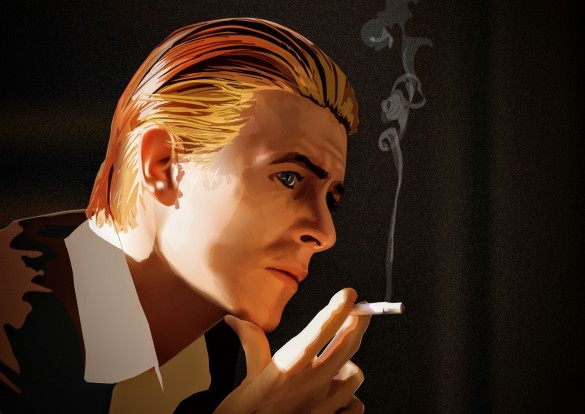 On this day in 1976, the Thin White Duke returned to England and greeted his fans at Victoria Station. 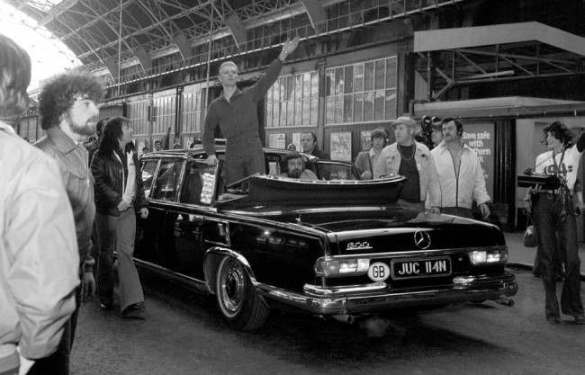 See the video below along with the German version of “Heroes”

Britain is ready for a fascist leader . . . I think Britain could benefit from a fascist leader. After all, fascism is really nationalism . . . I believe very strongly in fascism, people have always responded with greater efficiency under a regimental leadership . . .

I watched the David Bowie documentary recently released on HBO GO, “The Last Five Years.”  Like nearly everything else on HBO, it was mostly liberal propaganda with little insight.  It claimed to be about the last few years of Bowie’s life with flashbacks to earlier points in his career but it completely ignored the most important period and manufactured several fictions.

Bowie’s final album “Blackstar,” whose title track alludes to the Nordic village of Ørmen, has its closest thematic and musical similarities to “Station to Station,” which Bowie released during his prophetic period as the Thin White Duke.  The documentary makes no mention of “Station to Station” or the Thin White Duke period.  Instead it focuses on the supposed gun control message of “Valentine’s Day” which makes no policy prescription for mass shootings,  and claims, without evidence, that “Lazarus,” arguably the best track from “Blackstar” and the title of Bowie’s successful musical, has something to do with Jewish open borders poet Emma Lazarus, who wrote the words regrettably attached to the Statue of Liberty.  Truth is far more interesting than these delusions, but for HBO, it is useless if it cannot be used to spread an anti-gun, pro-amnesty agenda.

If you are reading this, you are probably thinking about watching the documentary to learn something about Bowie, or, like me, you are upset about the documentary’s failings.  In either case, IPR-X can provide you with some of the useful, insightful information you seek.  Let’s look at the relevant connections to the end of Bowie’s life and more importantly, what happened after he died.

Joy Villa, the recording artist who wore the “Make America Great Again” dress to the Grammy Awards in honor of President Donald Trump last week, made such an impact with the public that for most of last week her 2014 EP “I Make the Static” was the #1 album for sales on iTunes and Amazon.  Concerning the reception she received, Joy told Breitbart:

Honestly, I did get some hate. I got some dirty looks. I got a guy who said, ‘I would like to step on it.’ You know. I got the negativity. But they didn’t come up to me and say anything except for that one person. The people who poured their heart and soul and actually came up to me and took photos with me and said I just wanted to tell you I love you. I love your dress. I love what you’re doing. Those were the overwhelming majority that day. Even at the Grammys.

Curiously, more digging about Joy uncovers a connection to the late great David Bowie, the Thin White Duke, whom we at IPR-X previously connected to Trump’s rise.  Joy is married to Danish photographer Thorsten Overgaard.  On his website, we find a multitude of articles featuring his photography, including some photos of Joy.  One article from February of last year titled “Remembering David Bowie” discusses the impact Bowie had on both Overgaard and Joy. Overgaard writes:

Joy and I happen to have had Ziggy Stardust as the soundtrack to our romance the first 6-9 months of our time together. When traveling from New York through Canada, Europe and to Asia we had it on repeat.

Apart from that period, Bowie haven’t filled our thoughts much of the time.

But when he died, you realize what you lost.

The article also shows Joy’s personal tribute to Bowie.  Just like her tribute to President Trump, Joy honored Bowie through a dress.  After last year’s Grammys, Overgaard and Joy visited Garbage Gone Glam where they created a dress on Joy’s body made up of Bowie album covers.

Tomorrow, Donald Trump, the Thin White Duke is inaugurated as President of the United States. 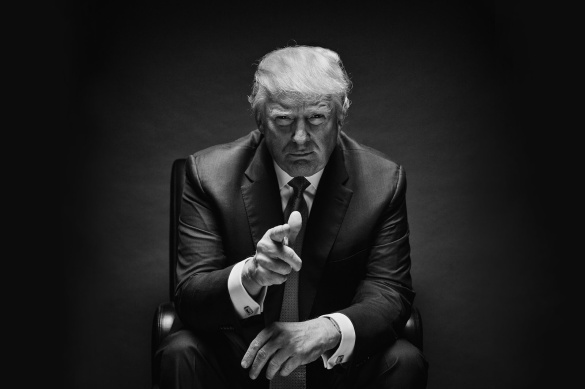 For the past few weeks, I’ve gone track by track of David Bowie’s album “Station to Station” discussing how each song connects to President Elect Trump.

Please listen again to each and appreciate its newfound significance:

The final track on “Station to Station“, “Wild Is the Wind” is the only song on the album David Bowie himself did not write.  Scranton-born Ned Washington authored its lyrics. Though a love song, just like the previous, its protagonist the Thin White Duke recognizes how tenuous love can be and how it can blow away in the wind like leaves from a tree.  Likewise, America, or at least the silent majority, currently loves President Elect Donald Trump, but that can change (my time was running wild) like the wind.  The love can last if as President, Trump does what he has promised, to Make America Great Again.

The fifth track from “Station to Station“, in “Stay“, the Thin White Duke wants his companion to stay with him rather than simply leave after a one night stand.  Donald Trump‘s pre-campaign fame was like the one night stand.  His place in history was nothing more than a footnote.  However, because he, like the Thin White Duke, decided to stay (or asked America to stay with him), he changed the course of history, and has become a permanent fixture in the grand scheme of things.

In a followup to “Station to Station” and “Golden Years“, the third track from David Bowie‘s prophetic album “Station to Station” is a straightforward discussion of faith and destiny in “Word on a Wing“.  The protagonist, the Thin White Duke, in many ways a foreshadowing of Donald Trump, discusses his struggles with faith and the Lord’s Will while maintaining continued belief.  He is then ordained with the grace of God.

Likewise, Trump has admittedly struggled with his faith in getting divorced twice and losing his brother Fred Jr. to alcoholism.  However, today, Trump is widely recognized as a true believer.  He cites the Bible as his favorite book and won the largest share of evangelicals of any previous presidential candidate.  As President Elect, with his “word on a wing” accepted, Trump is “ready to shape the scheme of things” in bringing about the Lord’s Will.

Lord, I kneel and offer you
my word on a wing
And I’m trying hard to fit
among your scheme of things

It’s safer than a strange land
But I still care for myself
And I don’t stand in my own light
Lord, lord, my prayer flies
like a word on a wing

My prayer flies
like a word on a wing
Does my prayer fit in
with your scheme of things?

For the past nine episodes of Thomas L. Knapp’s Knapp Stir Podcast, I have served a pivotal role.  In many ways, I should be credited as a producer of the show.  A large majority of the content from these past episodes either comes from me directly or my surrogates on topics I want Knapp to discuss.  This is done through Knapp’s “Thanks for Asking” threads for which he devotes most of the podcast.  Topics I had Knapp discuss included the Thin White Duke David Bowie, 2016 FPP Peace Prize winner and Libertarians for Trump founder Walter Block, conspiracy theorist and possible government agent Andy Jacobs, Cyberpig Paulie Frankel and his failing health, Knapp’s excessive profanity, PLAS Place founder Robert Milnes, and PizzaGate.  Although I started off disliking Knapp, he is starting to grow on me.  Even though I usually disagree with everything he says, I have begun to enjoy his podcasts.  For that reason, I’m proud to be a major contributor.

To better understand this situation, let me go deeper into the backstory.

I first commented on the knappster blog on the October 5 “Thanks for Asking” thread.  I asked a question, it was deleted, and I was banned from the site.  IPR (from which I and many others are banned) has people like Knapp, who think of me as a terrible person since I dared to be different and challenged libertarian orthodoxy.  These people have a hare trigger to ban me where ever I may comment.  On October 9, Knapp discussed me (for the first time I believe) on Episode 99 of the Knapp Stir Podcast, and he was particularly nasty.  As a result, I wrote an article for the Grand Inquirer called “The Corruption of Thomas L. Knapp,” discussing Knapp’s big ego, failures in politics, and questionable activities as an IPR moderator.  Afterwards, Robert Milnes questioned on the October 13 “Thanks for Asking” thread why my October 5 question was censored and left unanswered.  Knapp answered Milnes insufficiently and inaccurately.  During Episode 100 of the Knapp Stir Podcast, Knapp read Milnes’ question, repeated the answer, and then announced that Milnes had been banned from the site.  The next week, as documented at IPR-X, Harry Areola asked a series of questions.  In his answer and on Episode 101, Knapp decreed that anyone who discussed me or Robert Milnes would be banned.  I continued listening to the podcasts and instructed my surrogates to ask certain questions.  I was hoping to find out more about Knapp for new Grand Inquirer story ideas.  The only story I formulated in this time period was “Thomas L. Knapp Goes ‘Full-Retard’,” discussing Knapp’s vote for Gary Johnson and subsequent decision to take a photo of his ballot, in effect making a permanent record of his idiocy.  Nevertheless, as the episodes went on I realized I was actually enjoying the shows.  I began looking forward to Sunday, when the shows came out.  I now know that that is because I have had effective control over the content and for that I thank Knapp.  I thank Knapp for allowing me to make his show entertaining.  For that reason, the knappster blog will now be added to my blogroll.

Enjoy these podcasts for which I should be credited as Producer: